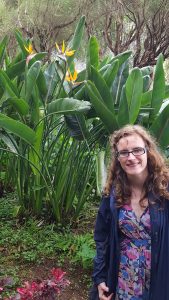 From an early age I believed in God. I was raised by loving parents so when they taught me the bible, I didn’t have any difficulty believing that God loved me.

However, at 13 years old, this belief was challenged when my sister was diagnosed with a degenerative, terminal illness.

When Kirsty was born, they thought she had cerebral palsy. But after a great struggle learning to walk, she quickly lost the ability and went back to crawling on the floor, then needing a wheelchair. We found out that this was Leukodystrophy and that this was just the start of her deterioration. She would keep losing abilities and functions and she would likely die before she reached 20.

I was very angry at God. Then, one night, I had a dream where I was in a boat with Jesus on a river. Nobody told me it was Jesus, I just knew, and I can’t describe how comforting his presence was. We were on a lovely wide river with many other boats. But Jesus took me off into a small stream where it was hard work to move. We had to row against the current and even carry the boat at times when it was too rocky to stay on the water. I asked Jesus why he would lead me here when it was so hard.

Then Jesus took me back to the main river and showed me that its destination was a waterfall. Any boats going over the falls were destroyed. There were people on the banks trying to warn those on the river, but only some of them listened. By the time they could see the danger, the current was too strong, and they were pulled over the edge. It was horrific to watch.

Jesus told me that he had to take me off that wide easy river or I would be just like those people. When I woke up, the anger had disappeared, and I was full of peace.

This encounter made me hungry to know God for myself. I started reading the bible and quickly came to realise that I could not meet God’s holy standards because I tried to do it. Every day, I would review my thoughts and actions and seeing how much I had failed- I soon despaired. How could God possibly love me?

From Sunday school, I’d heard about Jesus dying on a cross, but I never really understood why he needed to do it. Now I saw that I needed forgiveness and that Jesus was taking my punishment on the cross. I was amazed by the love of God who would go to such lengths for me.

At the age of 15, I was baptised and publicly professed my faith. However, soon after this, things started to go very wrong for my family. As things went from bad to worse, I found myself once again very angry at God.

I remember walking out of one youth group meeting, so sick of hearing the promises of the bible when they didn’t seem to meet my reality at all. I screamed and shouted at God. I said, ‘what if I just walk away right now? I think I might be done with being a Christian’. Immediately, a voice spoke in my mind, ‘whether you stay or walk away right now and reject me, I will love you the same’. This pierced my heart and I felt as if I had just slapped God in the face.

However, I was not done being angry with God. Throughout my university years, I continued going to church but I was so angry that sometimes the only thing that prevented me from walking out of a service was what other people would think of me. Inwardly, I had terrible thoughts towards God. I demanded that God act a certain way to fix things in my family. If He didn’t do what I wanted, I wanted to punish God by refusing to respond to the grace I had already known. I was pushing God’s love away quite deliberately and spitefully.

I even began to question whether God really existed or if He was just a fairy-tale of wishful thinking. But the problem was that I couldn’t see any hope in world without God. I was getting top grades in my degree; I had lots of friends…but it all seemed very empty and pointless. I didn’t believe that politics or education or charities could make the world a better place. History showed me otherwise. Literature showed me otherwise. I saw the world was in a rotten state and I kept asking myself, ‘where was God? Why wasn’t God intervening? If there was a God, perhaps He was just cruel or a tyrant or completely indifferent.’

I couldn’t cope under the weight of despair. Darkness was so real to me, I was frightened of it. I was depressed to the point where there seemed little reason to get out of bed and a simple task like washing the dishes was difficult. When I started to have thoughts of suicide, I got desperate.

One night, I cried out, ‘I can’t live like this anymore. God, if you are real, prove to me that you are living and active in this world and that you love me’.

If somebody went around slandering you and saying bad things about you, you wouldn’t really want to help them. Yet God immediately, tenderly responded to me as soon as I reached out to Him. My prayer was so full of unbelief, yet God has mercifully been showing me for the past 9 years since I made this prayer that Jesus is indeed alive- living and active in this world. Jesus has already proved His love, beyond questioning, in his agony on the cross for us.

I was in a total mess. God instructed me to ‘seek Him first’ and I finally stopped demanding that God do what I wanted and agreed to come on His terms. Within months of re-visiting the Jesus of the gospels, I was utterly broken and convicted.

All those years ago, I had accepted Jesus as my saviour, but I had not accepted Him as my Lord.

I was ‘on the throne’ of my life, not Jesus. I was ‘in charge’. I wanted things ‘my way’. And of course, when we are ‘on the throne’, we play at being God thinking, ‘I could do a better job at ruling the world than you God’. We think we have the right to judge God and blame and accuse Him. But why? Have we done such a great job at ruling this planet and running our own lives? Are we so good that we can tell God He isn’t? Are we so wise that we can advise God what is best?

If God had answered my prayers the way I wanted, by giving me and my family a comfortable and easy life, I would have carried on ‘selfishly living as I pleased’ and kept God off ‘the throne’. By refusing to give what I demanded, He exposed my real desires. And I can’t call God unfair. If He had been fair and given me what I deserved, I would be punished rather than Jesus.

Jesus is not a saviour that I can keep ‘in my back pocket’ to use when I see fit. He is God- the rightful King. When he told a storm to ‘be still’, the winds and waves obeyed because He is in charge. Often, I might not understand why certain things happen, but God has clearly said, ‘my ways are not your ways and my thoughts are higher than your thoughts’ (Isaiah 55:8)

We can look at Jesus and see who God is and realise that he is the best, wisest, most wonderful King who deserves to be on the throne and we can surrender our pretend little crowns and trust that it is much better to put our lives in His hands.

This is the verse that I want to define the rest of my days on earth:

I have been crucified with Christ; it is no longer I who live, but Christ lives in me. The life I now live in the body I live by faith [by adhering to, relying on, and completely trusting] in the Son of God, who loved me and gave Himself up for me. Galatians 2:20.

Jesus said that those who wish to follow him must pick up their cross daily.

When Jesus was struggling to choose to be obedient to death for our sake, he prayed to His Father, ‘not my will, but your will’.

This needs to be my prayer every day. It is much more fitting for me to pray, ‘not my will’ because my will is distorted by sin. We think ‘surrender’ is a bad word like ‘losing’ or ‘giving up’. But what we lose is trash and what we gain is treasure. I need to be crucified with Christ- the part of me that has to die is sinful and despicable. But wonderfully, it is then Christ who lives in me- He is beautiful beyond description.

I will just end this testimony by saying that no one knew how wonderful Jesus is better than my sister. Kirsty’s illness did get worse just as the doctors predicted. Eventually, she was almost physically ‘locked in’. Her body just shut down. She had daily pain attacks that required morphine. Her world was reduced to the size of her bedroom. She had very little of the things we think are needed for happiness. She knew a lot of sorrow. Yet she was also full of joy because Jesus was her daily companion. She was 21 when she died and she couldn’t wait to see Jesus ‘face to face’. Kirsty had a dream about a month before she died telling her that her time was running out. She was afraid and upset by it, but then I saw the fear leave her as she remembered she was going to be with Jesus. When she breathed her last breath, the joy and presence of God in the room was electric. It has made me look forward so much to the day when I too can join her, no longer seeing glimpses of Jesus that fade away, but seeing Him as He really is.