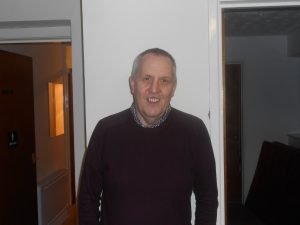 I had gone to church as a child, I had heard the bible accounts and I had no cause to disbelieve them. If there was a God he would easily be capable of things I was told He did. As I grew into my mid-teens I found it all rather lifeless and boring. There were other things far more attractive and exciting for me to explore… and at around 15 years of age I decided I would not waste my time any longer going to church. I had decided that Christianity was for weak and feeble people who need a crutch. As for me I was young, Fit, strong, able, and confident what could possibly go wrong me versus the world was a fair fight and I was going to do my own thing.
For over twenty years that was what I did…my own thing, I lived for myself, I manipulated people I was very kind and caring to those who could benefit me and showed myself to be diligent and hard working to decision makers in my life. I schemed and dodged and dealt often unscrupulously with people but at the centre of it all was ME. I got Married when I was 23 my wife and I had two beautiful girls and life was great. At 32 I had my own business and all was well.
I had, as I saw it no need of God even if there was one I had sort of proven myself as I thought. Then one early summer day aged 37 I found myself at work involved in a mundane task and my mind began to wander. I found myself thinking: Is there A God? And if there is a God what difference does this make to me? All I had heard as a young teenager came back to my mind about all that God had done for me through His Son Jesus Christ and I just wanted to dismiss all this from my mind. I knew somehow there was a cost to this, I knew if I conceded that God was real things would have to change. I could not dismiss these things from my mind they carried too much importance it seemed. I stopped what I was doing made a coffee, lit a cigarette and sat out in the early summer sunshine. I was taken up by the beauty of creation all around me and had to concede that I and all I see cannot be the result of billions of uncontrolled random events but rather someone made all this! There is a God in Heaven seemed a very reasonable thing to conclude from the evidence as presented to me.
God had very kindly troubled me to think on these things and He continued to deal with me through the rest of that summer. I began to feel great conviction and guilt about how I was living my life. I was selfish and manipulative and I could now see it plainly before my eyes. My language and conversation were tainted with obscenities and things which you would not repeat in any half decent company. I was dirty and needed to be clean. After three months of wrestling I came to saving faith in Christ, He alone could deal with my soul and my need to be right with God. I have been a Christian for over twenty years now, the Lord has been kind .It has not been easy, I have been subject to all the trials and heartaches of life, but I have obtained mercy, I have his help. Above all I have peace with God.