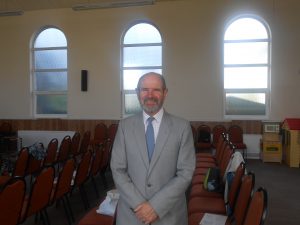 By the time I had left University,  I had a settled opinion that the world could
be explained by science and therefore there was no room (and no need) for God.

When I was in my early 30s I was shocked (and angry) when Meirion (a Christian)
told me “only those who know Jesus Christ as Saviour will get to Heaven”.
I could not recall ever hearing anything like that before and I determined
to try and ignore it (although I did lose some sleep).
Over the next 4 yrs Meirion would occasionally ask me some probing questions
but I stubbornly resisted with my confidence in the Big Bang I’d taught in
Physics lessons.

Then in March 1988 I went to a funeral of a tough guy who had died
in his early 40s (prior to this I had been troubled at two other funerals
of men who were younger still). But this funeral was different because the
tough guy had become a Christian and written the sermon himself.
The old preacher obediently shouted and pointed at the 600 present, “Where
will you spend eternity?”. I was deeply offended but managed eventually
to shrug it off.

Next month, my family was invited to a church service and they all went
without me – I had decided the garden needed digging! As I was digging I
began to argue with myself
“Why didn’t you go?”
“I don’t want to go”
“Scared are you?”
“No, it’s all rubbish”

“What if they’re right?”
And this was the cycle of my thoughts all the time they were away. After
about 2hrs my wife returned in tears – “What’s wrong?” I asked
“I’ve met with God” she replied.
“Where?”
The whole thing seemed ridiculous to me but, as the days followed, there
was no doubt she had changed. She would go upstairs to read the Bible and
pray, try to talk to me about Jesus, go to church plus take my kids to
Sunday school. I remained hostile.

One evening my girls were in the bath and were asking me why I didn’t
come to church too, to which I gave some kind of irreverent reply as I
turned my back to fetch their towels. Suddenly one of them said
“Dad, you won’t be saved”. Once again I was angry.
The next few months were extremely difficult as I concluded that there
were ONLY two possibilities
a) I was right, thus my wife was mad and not fit to bring up my kids
OR
b) She was right, in which case I was in big trouble.

I dutifully attended my wife’s baptism and, although it was deeply moving,
I was still unchanged. Meirion and his wife invited us to a Pentecostal
Christian camping holiday in Malvern and, reluctantly, I agreed because
my family were so keen. Meirion then said to me, “If you ever show interest
in Jesus the devil will fight you every inch!” Once again this just seemed
a ridiculous statement. 5 days before the holiday, there were 2 problems –
firstly I could not find a kennels to take my dog, and secondly, my camper
van broke down!

Those words “the devil will fight you” kept coming into my head and,
although I DID NOT want to go to Malvern, I did not want anyone to
stop me going either! The day before we were due to leave, the garage rang
to say that they were “struggling to fix it in time” and I responded by
stressing “I need it tomorrow.” Again “the devil will fight you” swirled
around in my head.

Tomorrow at lunchtime the repaired van was delivered to my door “Brilliant!”
I said but within a few minutes I heard a loud horn. I rushed up to the van
and just could not get the horn to stop – I began swearing as I tugged at
cables- “the devil will fight you!”!!! Soon my wife came out and seeing the
problem told me that she had been praying(which really annoyed me!) and that
if I reversed the van a yard the horn would stop. In temper I slammed the van
into reverse and went back a yard AND THE HORN STOPPED!

By now I was really freaked out as we set off(with no horn) for Malvern.
After 2 hrs we pulled up to the gates of the site – I had expected a badly
organised bunch of weirdos in socks and sandals – to find a huge site of
2000 people and to be told that NO DOGS were allowed. Stubbornly I told
the guy that I had driven 100 miles and had no intention of turning around.
He spoke to someone on his walkie talkie and then said to me “if you turn
round go left then 2nd right then across the humpback bridge etc you’ll
find a house with a green door – I reckon he’ll take your dog” . And
bizarrely, he did take my dog adding to my collection of weird events.

This was Saturday and I had the great excuse of “looking after my kids” so
whilst everybody went off to meetings, I stayed in the van .

On the Thursday afternoon Linda, a lady camping in the same field, offered
to babysit so that I could go to the meeting that night. I was far from keen
until she pointed at me and said, “You should go tonight”. “OK” I said “I’ll
go but no one is going to brainwash me “.

I went and was bored as an old jet-lagged American guy spoke and then suddenly
something happened – I began to see all my achievements in a list – all that
I was so proud of and an inward voice said “all a waste of time!”. I was stunned
because these were my BEST deeds! And then I saw a list of my WORST deeds –
all the things I was ashamed of – and I was absolutely smashed ,so devastated
that I cried to God “Lord, I’m ashamed, save me!” And He did. And I knew He had.